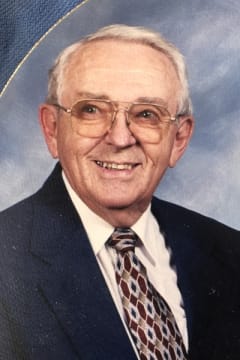 Donald H. Rupe, 96, Altoona, passed away Wednesday at UPMC Altoona.
Don was born on Altoona, son of the late Stephen and Ruth (Lockard) Rupe. On January 25, 1945, he married Barbara Nelson who preceded him in death on December 6, 2011.
Surviving are two daughters: Cynthia R. Humphreys (James H.) of Bellwood and Donna M. Rupe of Altoona; five grandchildren: Donald S. Humphreys (Rebecca), C. Christine Poskins (Chris), Tamatha L. Neupauer (Nicholas), Joshua R. Williams and Natalie B. Propes (Jason); fourteen great-grandchildren; special friend, Audrey Hamilton; sister-in-law, Madeline M. Rupe and several nieces and nephews.
He was preceded in death by his wife; two brothers: Jack Rupe and Dean Rupe; and a sister, Marjorie Emerick.
Don was a 1943 graduate of Altoona High School and was a U.S. Navy veteran of WWII. He was the former owner of Deininger and Rupe Dental Lab.
He was a member of the First Evangelical Lutheran Church and was a former member of Simpson-Temple United Parish.
Don enjoyed trains, fishing, dancing with the Golden Nuggets and was an avid Pittsburgh Steeler fan. He especially enjoyed meeting with his friends at Duncan Donuts and talking to people about Jesus.
Don was a volunteer at the James E. Van Zandt VA Medical Center, a member of the American Legion and taught Sunday school for many years.
Friends will be received from 10-11 a.m., Saturday, February 27, 2021 at First Evangelical Lutheran Church, 1401 12th Avenue, Altoona, PA 16601, followed by a funeral service at 11 a.m. by Rev. Dr. Barry R. Folmar. Interment will be at Rose Hill Cemetery.
The family requests that memorial contributions be made to First Evangelical Lutheran Church in Don’s memory.
Arrangements are by E. Merrill Smith Funeral Home, Inc.
Condolences may be made at www.stevensfamilyfuneralhomes.com or Stevens Family Funeral Homes Facebook.

We offer our deepest condolences to the Rupe family, sending prayers and support as you travel through this difficult time. There are many fond memories of Don and your family and their service to First Lutheran Church. May you take comfort in knowing he is in a better place. Sincerely, Terry & Annette Pannebaker
- Terry Pannebaker
Donna. My thoughts and prayers are with you. Brenda Warner
- Brenda Warner
So many memories of growing up at First Lutheran Church and knowing your family. Keeping you in my thoughts and prayers. - LuAnn (Eicher) Hallinan
- LuAnn
Our thoughts are with the family at this time of sorrow.
- Paul Hetrick DMD

My dearest, Cindy, Donna and family. Please accept my deepest condolences and love at the passing of your beautiful Dad. He had a smile I will never forget and a personality that you girls have surely inherited. My sister says our last breath on earth is our first breath in heaven. I am sure this is true. Know I am thinking of you as you take your Dad to his final rest.
- Sherry Clapper