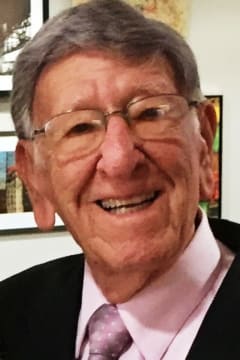 Gerald “Jerry” was born in Altoona, PA on April 23, 1928, the son of Irving and Sara (Kirshner) Bergstein. He married Joan (Davis) in Cumberland, MD on July 3, 1951.
He is survived by his wife of 71 years, three sons: Scott (Jessica) of Kuala Lumpur, Malaysia; David (Nancy) of Altoona, PA; and Keith (Rita) of N. Huntingdon, PA; daughter-in-law, Janice of Greenville, SC and nine grandchildren: Jessica (Matthew) Hoff of Ithaca, NY; Joel (Ruth) of Asheville, NC; Matthew (Carrie) of Brooklyn, NY; Rachael (Vasilios) Kapousidis of Greenville, SC; Adam (Jamie) of Altoona, PA; Seth (Catherine) of Dallas, TX; Courtney (Robert) Durante of Irwin, PA ; Kristen (Kyle) of Memphis, TN; Caitlin (Geoff) Attinger of Bethel Park, PA and nine great grandchildren: Isabelle and Julia Hoff; Mason and Lilliana Durante; Leah and Nora Bergstein, Beck Bergstein and Ian and Leo Kapousidis. He is also survived by three sisters: Marjorie Dunn and Sandra (David) Parks of Altoona, PA; Deborah (Ben) Dilliner of Ocala, FL and numerous nieces and nephews.
He was preceded in death by a son, Barry, and three sisters: Ann Siegel, Pearl Donshik and Lillian Sapoff.
Gerald attended Altoona High School and Penn State Altoona. He was a lifetime member of Penn State Alumni. At the age of 13, he began working for Joseph S Karp Bros restaurant supplies. He eventually became sole owner and continued as President of the company until its closing in 1984. After WWII, he enlisted and served in the Army; he was stationed in the Philippines for 1.5 years.
Jerry enjoyed golfing and bridge, but most of all, spending time with his family and friends. He always greeted them with a hug and a smile. He loved his family fiercely.
If you’d like to make a donation in Jerry Bergstein’s honor, the family would appreciate that you choose the American Heart Association or Costumes For Courage. Costumes for Courage is an organization created by Jerry’s granddaughters that gifts costumes to children facing significant medical challenges and provides support to their families. Additional information can be found at www.costumesforcourage.org and heart.org.
A funeral service will be held at 10 a.m. Friday, Aug. 26, 2022, at Agudath Achim Synagogue. Interment will be held at Agudath Achim Cemetery.
Arrangements are by E. Merrill Smith Funeral Home, Inc., 2309 Broad Ave., Altoona, Pa. 16601.
Condolences may be made at www.stevensfamilyfuneralhomes.com or Stevens Family Funeral Homes Facebook.