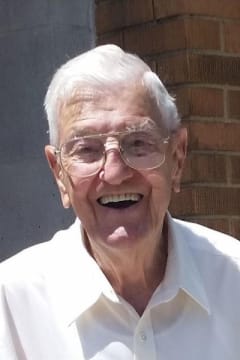 Joseph Edward (Ed) Wilson, 96, of Trenton, Ohio, entered the presence of his Lord and Savior Jesus Christ and was reunited with his beloved wife Alice on Monday, January 18, 2021.
He was born in Barnesboro, Pennsylvania, son of the late Thomas and Leona (Lowmaster) Wilson. He married Alice (Thomas) Wilson on June 11, 1949 at the Second EUB Church in Altoona, Pennsylvania.
Surviving is a son, Thomas Edward (Karen) of Beavercreek, Ohio; a daughter, Patricia Louise (Danny) Kuykendoll of Trenton, Ohio; seven grandchildren; and eight great-grandchildren.
He was preceded in death by his beloved wife of 66 years, Alice, and a brother, William Robert Wilson.
Ed graduated from Altoona High School in 1942 and served in the Army during World War II in the Pacific Theater, including New Guinea, the Philippines, and the Japan occupation forces. After the war, he was employed by the Pennsylvania Electric Company as a lineman, retiring in 1986.
A loving husband, father, grandfather, and great-grandfather, he loved family vacations to friends and family and, post retirement, annual winter vacations to Florida with his wife. He also cherished visits with his children, grandchildren, and great-grandchildren.
Friends and family will be received from 10 – 11 AM on Saturday, January 30, at the E.Merrill Smith Funeral Home, 2309 Broad Avenue, Altoona, Pa. 16601, followed by a celebration of his life at 11 AM, with Pastor Timothy McGarvey. Interment will be at Alto-Reste Park Cemetery in Altoona, Pennsylvania with a graveside ceremony.
In lieu of flowers, the family requests that donations be made to any of several organizations he supported, including the Billy Graham Evangelistic Association, RBC Ministries, Ethnos360, or the Altoona Alliance Church.
Condolences may be made at www.stevensfamilyfuneralhomes.com or Stevens Family Funeral Homes Facebook.