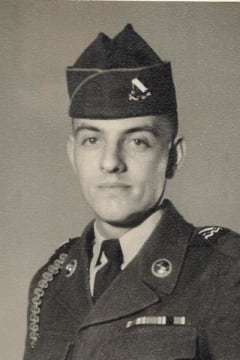 Lloyd R. “Sarge” Strohm, 93, Altoona, passed away Monday at UPMC Presbyterian Hospital in Pittsburgh.
He was the son of the late Lloyd W. and Lillian M. (McElwee) Strohm. Lloyd married Kuk “Chris” Ko on September 25, 1965 in Seoul, Korea.
Lloyd is survived by his wife; two daughters, Jeannie (Daniel) Ferrell of Warriors Mark and Tammie (Jonathon) Epple of Bellwood; four grandchildren, Joshua and Ian Ferrell and Josiah Epple and Jael (Kere) Frey.
He was preceded in death by three brothers: Omar, Paul and Earl Strohm.
Lloyd was a 1945 graduate of Altoona High School, he then entered the United States Army, where he served faithfully during World War II, the Korean Conflict and the Vietnam War; he retired as Master Sergeant. Lloyd then retired from Butterick, Inc.
He was a member of First Church of Christ where he formerly served as a Deacon and Elder. Lloyd was a member of the American Numismatic Association. He was a sports fan and enjoyed bowling.
Friends will be received from 10-11 a.m., Friday, December 18, 2020 at First Church of Christ, 113 Good Shepherd Road, Altoona, PA 16601 where a funeral service will be held at 11 a.m. with Pastor John Collins and Pastor Kim officiating. A private interment will be at Blair Memorial Park, Bellwood.
In remembrance of Lloyd, contributions may be made to First Church of Christ, 113 Good Shepherd Road, Altoona, PA 16601.
Arrangements by E. Merrill Smith Funeral Home, Inc.
Condolences may be made at www.stevensfamilyfuneralhomes.com or Stevens Family Funeral Homes Facebook.