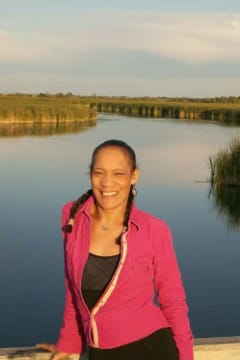 Obituary For Patricia A. Lewis

Patricia A. Lewis, 61, Altoona, passed away Thursday at her residence after a battle with cancer.
Patricia was born in Altoona, daughter of the late Wayne Campbell and Mary L. (Morris) Barnes.
She is survived by her companion, John Dunn of ND; a daughter, Alitzah T. Morris (Dr. Walter Jackson III) of Owings Mills, MD; four sisters: Jacqueline M. Loner, Brenda L. Lewis, Julia A. Fortson and Tajuanda Christman, all of Altoona; and five brothers: Timothy A. Morris, Carlos Loner, Jonathan Loner, Brian Morris, all of Altoona, and Tracey Smith of Pittsburgh.
She was preceded in death by a sister, Nicole Campbell and nephew, Jeremy Lewis.
A celebration of her life will be held at the convenience of the family.
Arrangements are by E. Merrill Smith Funeral Home, Inc.
Condolences may be made at www.stevensfamilyfuneralhomes.com or Stevens Family Funeral Homes Facebook.

So very sad to hear that Our dear friend had passed on. Patty was a very loving, caring and thoughtful woman and was there if you needed Vent. She always made me feel better after our talks. She brought my spirits up and she was so willing to help me and my family when we needed it. Appreciated her so much!! She loved my daughter , Cece and her duct taped wallets. Patty would buy them from her and give them away to her special friends and customers. She told us that she gave one to a person from Germany! I worked with Patty at the holiday inn express and also at the deli. I loved working with her. My dear friend, i will miss your laugh and all the good times we had together. No more pain for u my sister, you r ' Our Angel' watching over us. REST IN PEACE PATTY. 💐🧡💜💛😻🌻🐞🌵🦋 XOXOXO From Kerri, Luther,Lilly,Luke,Lane,Lars and Cecelia.
- Kerri Bird Horse

To the family of Patty I'm am so sorry for your loss. Patty was an amazing woman that had a heart of gold and made everyone laugh and smile. I really miss working with her. She did a lot for me and I could never thank her enough. She will be greatly missed and always remembered. Rest in peace Patty.
- Samantha Graber

I'm so sorry to hear of Patty's passing. She was an incredible woman who's laugh and smile was infectious, she will be terribly missed. My thoughts and prayers are with her family during this difficult time. May you Rest In Peace Patty!
- Heather Janssen