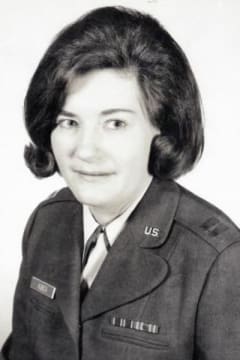 Veronica was born on July 9, 1930 to Martin and Susan (Radolsky) Kubica. She grew up in Altoona, and upon graduation from high school in 1948, she attended the nursing program at Philipsburg State Hospital graduating in 1951. For the next four years, she worked as a Registered Nurse in several local hospitals before convincing one of her nurse colleagues to join the U.S. Air Force under the “buddy system.” She was commissioned into the United States Air Force Reserve in late 1955. She had numerous stateside assignments during her twenty-year military career to include Texas, California, Ohio and South Carolina. She also had three overseas assignments, first in Spain, followed by Japan, and later Okinawa. Bernie retired in 1976 and enjoyed the opportunities to travel up and down the East Coast with friends until her health no longer permitted this. She also pursued an interest in needlework by attending classes and perfecting her skills.

Bernie was a charter member of both the Society of Air Force Nurses and the Women in Military Service for America Memorial. The Women’s Memorial stands at the entrance to Arlington National Cemetery.

Bernie was predeceased by both her parents, and two brothers, Michael and Joseph Kubica. She is survived by her brother, Anthony, as well as nieces, nephews and cousins and a sister-in-law, Alice Kubica of Milwaukee, Wis.

Friends will be received from 3 to 6 p.m. Tuesday, July 14, 2020, at the E. Merrill Smith Funeral Home, 2309 Broad Ave., Altoona, where a vigil service with Carmelite prayers will be held. She will be laid to rest at 1 p.m. Wednesday, July 15, 2020, with graveside services and military honors at Indiantown Gap National Cemetery, Annville.

In lieu of flowers, donations may be made to a charitable organization of one’s choice or to the Women’s Memorial Foundation, 200 North Glebe Road, Suite 400, Washington, D.C., 22203.

Condolences may be offered at stevensfamilyfuneralhomes.com or Stevens Family Funeral Homes’ Facebook page.