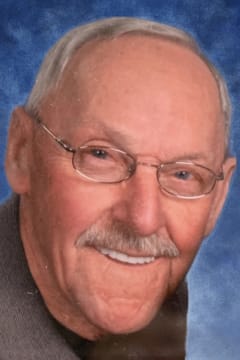 William Clyde “Big Willy” Filler
January 17, 1933 – December 4, 2021
William C. Filler, 88, Altoona, passed away to be with his Lord and Savior on Saturday from complications of pneumonia, lung cancer and COPD.
He was born on the family farm in Rainsburg, a borough of Bedford County, PA, son of the late Franklin C. Filler and Mary (Kidd) Filler.
Surviving are his loving wife of 64 years, Nancy; three sons: Matthew (Janet) of Dublin, OH, William A. (Lisa) of Hollidaysburg and Scott (Lisa) of Altoona; five grandchildren; seven great-grandchildren; and two siblings: Maxine Hart of Hollidaysburg and Wanda Dunkle of Duncansville.
He was preceded in death by an infant sister, Sara.
Bill enjoyed attending sporting events and watching baseball. He loved attending the Altoona Curve baseball games and was a lifelong fan of the Pittsburgh Pirates and Baltimore/Indianapolis Colts. Bill was an Assistant Coach for 7 years with Automotive of the Altoona Little League. He later coached Brunswick Billiards in the George B. Kelly Federation for 3 years and assisted Bud Wertz on the Sheetz AAABA baseball team for 3 years. He was a member of several bowling teams throughout his life. He was proficient in carpentry and helped to build homes and to do odd jobs throughout his career. More than anything else he loved spending time with his family and loved ones.
In his younger years he enjoyed playing guitar and performed with Robert Cummings singing and picking at the old Musselman’s Grove stage in Claysburg. He also enjoyed deer hunting with his sons.
Bill was a US Army Veteran of the Korean War as a member of the 7th Cavalry Division under the First Division. He handled the lanyard on the 155 Howitzer.
Bill worked at the Nabisco plant in Altoona for 2 years after returning from military service. He also spent 2 years at Fleck’s lumber yard and worked 2 years for the Pennsylvania Railroad at the Samuel Rae Shops as a railroad yuke driver. He then started work at Veeder Root in 1957 and worked 37 ½ years retiring in 1994.
He was a member and past president of the United Steel Workers of America Local 7853. He then went to work for Weis Markets part-time for 13 years as a greeter and cart attendant and once again retiring in 2007.
He was a lifelong member of Bethany Lutheran Church in Altoona, where he was on the church council and played softball in the church league for many years. He was also a member of the Bavarian Aid Society.
There will be no viewing, but family and friends are invited to a celebration of life service at 11 a.m., Thursday, December 9, 2021 at Bethany Lutheran Church, Altoona.
Arrangements are by E. Merrill Smith Funeral Home, Inc.
Condolences may be made at www.stevensfamilyfuneralhomes.com or Stevens Family Funeral Homes Facebook.